As of last year, Gavilon Grain has become a part of out neighboring town.  They created a railroad spur and built some really big bins for housing corn, beans, and grain.  It was a pleasure to witness a little history in the making as the bins were formed in a continuous pour that kept a special team of workers and most of the local cement trucks working around the clock for about a week straight.  You could watch the side walls of the bins gain height by the hour.  It was an amazing site, and I wish that I would have had more time to take photos of the event!

Here is one of the few pics that I got﻿ as they were finishing up the second set of bins.  On the top of the left bin there was a make shift platform that rose with the sidewalls.  It had a break room and bathrooms located on it for the workers to rest during their long shifts.  There was also a catwalk suspended from that level where workers (with apparently no fear of heights) finished off the side walls... 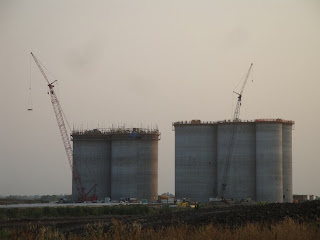 Not only was this an interesting small town happening, but this brought a handful of much needed jobs to our area.  During the Spring while this facility was under construction, Farmerboy was getting ready to graduate from college with a degree in Business Ag.  He still hadn't decided what type of job to apply for.  Mr. Hollow talked him into applying to Gavilon.  It seemed a perfect fit.   My son has been a train NUT since he was two years old and has always been obsessed with ANYTHING farm related.  Oddly enough, the kid was skeptical whether he would like it or not... Try and figure that one out! ;) 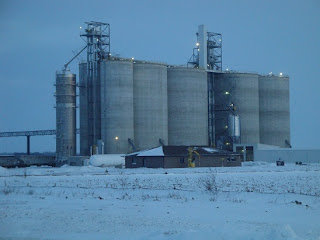 Well... here we sit a year later.  My son has been employed by Gavilon since August.  With Ag it can sometimes be a hectic schedule, but I can tell he likes his job and in these times that is truly a blessing!  He has an office that he works out of located between the center of the bins where he runs the computers to load train cars.   Granted it is not always trains and loading...  Some days are general maintenance and receiving, but I thank the heavens that he got a job in the field that he loves and in the local area that he wants to stay living in. 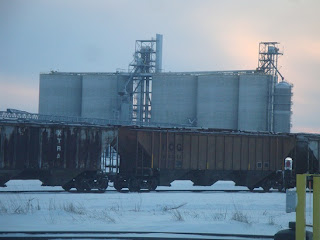 It seems a lifetime ago when this kid discovered  "Thomas the Tank Engine" on PBS.  It was 1991 to be exact.  Who would  have thought that at 22 years old my son would be given the opportunity to drive his first train in order to shuttle and load cars.

Some dreams really do come true... :)

Email ThisBlogThis!Share to TwitterShare to FacebookShare to Pinterest
Labels: Outings and Events

Have I ever told you that my son loves to weld?  He is actually very good at it.  The talent comes in handy with all of the old farm equipment that he collects. ;)  Lately, his welding has taken on an artistic twist.  My Farmerboy is churning out grasshoppers... swarms of them.  These "recycled hoppers" are made from old pipe wrenches that he purchased at a local auction last year.  The John Deere colored one in the center is for Farmergirl's Grandpa's birthday.  My son made one for him last year, but apparently Grandma confiscated it as a decoration for inside the house! :)  ﻿ 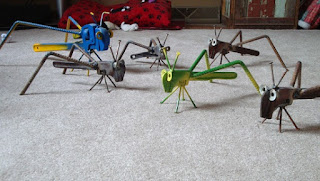 I never know what I'll find crawling around my house, when I get home from work! LOL 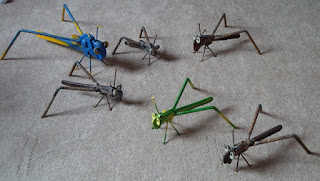 Shave 'Em to Save 'Em

Shout Out to Fiber Artists!


If you would like to inquire about purchasing an item directly from me or drop a friendly line, I can be contacted at pumpkinhollowprimitives (at) hotmail.com . (Just replace (at) with the @ symbol.) I would be happy to hear from you! :)

Do not remove any graphics, photographs, and text without my permission.

All content and original designs are the property of and copyrighted by Pumpkin Hollow Primitives ~ Brenda L Neblock - Story.